“Everything happens for a reason…”

“I believe that everything happens for a reason. People change so that you can learn to let go, things go wrong so that you appreciate them when they’re right, you believe lies so you eventually learn to trust no one but yourself, and sometimes good things fall apart so better things can fall together.”
―Marilyn Monroe

Excited to take the tinnie out and finally go fishing with my partner, we hooked up the trailer and headed toward the boat ramp.  It had been a long day where nothing seemed to go “right” for both of us, so the best cure we thought would be some fishing! And hopefully a “fishy wishy for my dishy” too! Think again.

On the way we decided to get fuel.  Lost in creative thought, I remained in the truck.  Suddenly my partner bolts past me with a tiny jerry can.  Ours had a small hole in it at the bottom and was leaking! So I held my finger over the hole and carefully we poured it into the teeny-weeny jerry can my partner had spontaneously purchased out of sheer necessity.  The jerry can didn’t hold much, so after an awkward ten minutes or so and similarly to our jerry can, our discovery that bikini tops were also neither practical or functional (but we won’t go there), we finally were able to squeeze the rest of the fuel in the boat and were soon on our way again.

Eventually we launched the tinnie.  We parked the truck, paid for a ticket and all that.  The tinnie didn’t want to go.  For two hours we tried starting it, attempting to fix it, attempted to fish off the pier and ate potato chips.  With no success (except for the consumption of chips), back on the trailer it went and home we went.

We arrived just in time to enjoy the view below! We would not have seen it if we had have got the tinnie to start! (My partner is a very keen fisherman and no doubt we would have still been fishing).  I grabbed one of my cameras out of the house and went running across paddocks to capture it.  So the moral of my little story is everything happens for a reason. 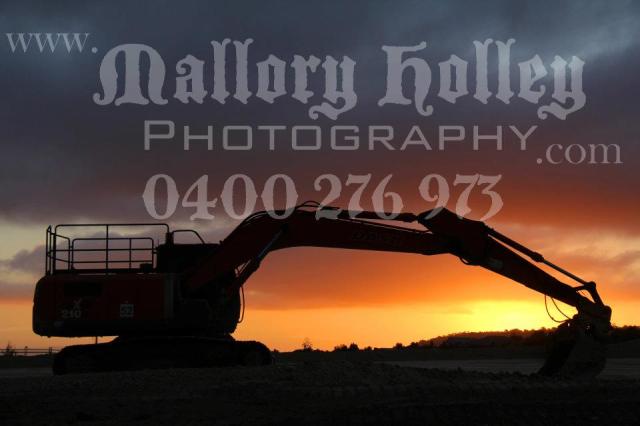 This entry was posted in Uncategorized and tagged everything happens for a reason, excavator, fishing, fishy, fuel, marilyn monroe, tinnie. Bookmark the permalink.